​My kids ask me this ALL THE TIME.

It’s a fair question, but I always pause before I answer to give careful consideration to my response, even if I’m trying to rush out the door. Because even though it may seem like a simple question, the answer can have a real impact.

To my five year old daughter Paige, I tell her it’s because I enjoy it, and I like how I feel afterwards. I tell her I love to feel strong and healthy, and that I love to run out in the fresh air. She usually accepts that, and just says, “Oh. So when will you be back?”

Phew, I usually think to myself. She’s hasn’t yet asked me if I’m doing it to be skinny or to fit in to certain clothes, which is a trickier conversation. I’m hoping it’s not inevitable that one day she’ll become insecure about her body or hate certain parts. She has the most amazing sense of self right now, and will wear anything without any thought of anyone’s opinion. She also has the most amazing posture, which always leaves me wondering about when she will reach the point in adolescence where she’ll turn her shoulders in. I hope we’re a long way off from that.

One early morning last week while Paige and her brother James were on spring break, I told them I was going out for a run, but that I was just going to do sprints back and forth on the road right in front of the house, so they can see me if they come down the driveway. On the first day that I did it, they never came outside. On the second day, Paige followed me to the door.

Hmmm. My first instinct was to say no. One of the many reasons I love to run is that it’s my time to myself, to think without distraction. But then I looked at her face and saw how much she wanted to come out with me. I’ll know I’ll have many more days in my life to run by myself, but there probably won’t be too many days that she’ll want to run with me. I decided to take her out with me.

We had so much fun. She did about half of each sprint, and then walked while I finished. We shared water, high fived after each segment, and listened to my music after I left my headphones in the mailbox. When we were done running, we did some planks and push ups together. I have to say, she’s pretty darn strong.

James asked me recently if we could run the upcoming 5k at his school together. I ran it last year by myself, but when he heard that some of the other kids run it with their parents, he said he wanted to run with me. I am really excited to run with him, and to see the look of satisfaction on his face when he finishes.

In the madness of everyday life, it’s easy to forget the fact that kids are always watching the adults around them and absorbing what they say like little sponges. I’ll often hear my kids repeat phrases I say all the time, or give an answer to someone that sounds exactly like something I’d say. The burden of responsibility on this weighs heavily on me sometimes when I think about it, but I wouldn’t trade it for anything.

And the next time one of them asks to run or work out with me, I will not even hesitate.

“Go get your sneakers on. It’s a great day to run.” 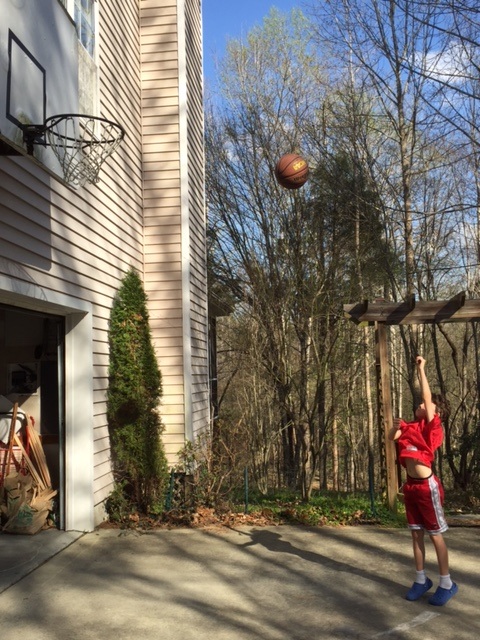