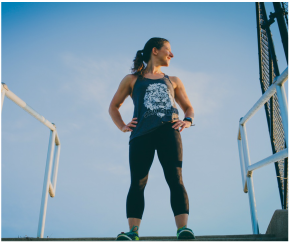 Summer is going by FAST!

When it’s time to break out the shorts at the end of the spring, I usually start thinking about a summer fitness goal. Typically the goal is one of two varieties: a number on the scale or a road race. Often, it’s both.

This summer, I decided to do neither.

Instead, I did these two things:

It’s been one of the best summers in a while.

Don’t get me wrong – I still love running, and will likely train for a race in the fall, assuming my heel gets better. (Have I said how much plantar fasciitis just plain sucks?) But I have to admit, not training for a road race in the heat and humidity of a North Carolina summer has been a nice break. I see people out running at NOON in the 90+ degree weather and I question their sanity. And as much as I loved marathon training, not being tied to a race plan is really freeing.

But this summer hasn’t been all cocktails and fun water slides. (Although, there has been a bit of that. It is summer, after all.) It’s been the summer without a plan. For some reason, I thought I could wing it with the kids and not fully book them up with camp, and realized within a week that I was taking a walk through crazytown by trying to play it fast and loose. I threw in the towel after the kids’ basketball camp and now have three babysitters on rotation so they’re entertained and not whining about time on the iPad. Lesson learned.

I’ve also been teaching more boot camps this summer, which has been really fun. People have been making AMAZING progress, and it’s been fantastic to see. Someone showed me before and after pictures this week and said, “Look! I have abs!” My day was made.

The only downside is that it’s made getting in my own workouts trickier. I’ve entertained the neighborhood on many occasions this summer with my 30 minute quick and sweaty workouts in the driveway.  I’ve been surprising myself at how sore I can be the next day after one of those workouts after working out in the gym all winter and spring.

So with all of the schedule craziness, you’d think my goals would be unattainable. But it’s actually been the opposite. I’ve been doing shorter (but intense!) workouts, and taking more days off. The crazy part is that I feel stronger and fitter now than I have in months.

My other goal, that cropped up recently due to some fantastically strong and inspirational female trainers that I feel lucky to call my friends, is to do 10 full chin ups. I’m up to 6, but I’m still working on the full range of motion.

So ladies, listen up: the feeling you get when you raise your chin above that bar using your bodyweight is one of the best feelings out there. You drop down from the bar and you feel like you can conquer the world.

Jenna and Holea, it may take me the rest of the summer but I’ll get to 10 chin ups. Thanks for letting me crash the party!