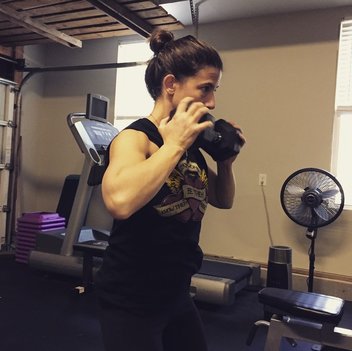 Oh friends, what a month.

Some not so good things, but also some amazing things. I’ll confess that I’ve been off my routine a bit for the past couple of weeks, both fitness and nutrition. A little bit of stress eating. A little bit of wine drinking. A lot of coffee drinking.

But it’s just life, and the skies are starting to clear. I feel back at the helm this week, and that’s a good thing. I finally feel back in the groove on bench press, and was even able to PR since my husband was around to spot me. Got off the bench and did a little strut around the gym. He laughed at me, but that’s okay.

But you know what’s even better? When my clients are hitting PRs and milestones like mad. There are few things I love more as a trainer than watching someone hit a milestone or a PR, especially when I’m there. I love seeing their face as they finish something they didn’t think they could do.

One of my clients did her first (and then second and third!) unassisted chin up right before my very eyes, and it was so stinking awesome. That look on her face was a mixture of joy, astonishment, and pride. I wish you all could have been there to see it.

Then one of my boot campers ran her first 5k without stopping to walk. So amazing to share that milestone with her.

This got me thinking about goals.

For so many years, my goal was to lose 10 pounds. I was solely focused on the scale, week in, week out. The gym–and the road–were tools to get me there. A means to an end. If I wasn’t getting results fast enough, I had to up the ante. More restriction. More exercise. But as a perfectionist, I was never satisfied, even when the scale showed the number I was aiming for. When I hit a goal, I scrutinized myself in the mirror. Time for a new goal.

But then I turned to marathon training, and the goal became the race. It was a longer term goal, and one that had higher stakes. The idea of training all summer in the heat and humidity to tank or bonk during the race was too much to bear. So I followed those training plans to the letter, and finished each marathon. I can’t say that I finished each one feeling like a million bucks (especially Asheville — those hills were tough!) but I did finish.

But then my body told me that it was time to ditch the marathon training. I was diagnosed with Crohn’s disease in 2013, and after doing the NY marathon in 2014, I knew it was time to give my body a break from all of that time on the road. It was crying for a change, and a new goal.

Enter my new friends: the dumbbell and barbell.

​When I started lifting heavy, I didn’t really set out with a goal in mind. But as I got stronger, some things started becoming a possibility.

My first chin up.

Squatting and deadlifting my bodyweight.

The goals suddenly became about getting bigger, not smaller. Stronger, not skinnier. And I was loving it.

There’s something really freeing about focusing on strength and PR goals and not just scale goals. And barring injury or life getting in the way, these goals are cause and effect. If you put in the work consistently and patiently, you’ll get there.

So if you’ve always focused on a weight loss goal, I encourage you to think about turning your attention to a strength goal for a little while. Maybe it’s your first push up off your knees. Or your first chin up. Or your first time bench pressing.

And if you need help getting to these goals, you know where to find me. Me and my barbell are always here for you.